Ever since its launch, the Raspberry Pi has been the target of DIY projects to construct a custom tablet PC. Few of these endeavors have had any real success apart from RasPad.

Developed by SunFounder and backed by crowdfunding, the all-new RasPad 3 is now available, designed for the Raspberry Pi 4. Does it bring a satisfying tablet-like experience to the Raspberry Pi platform? Can it compete with established tablet platforms? Let's find out.

Can You Turn a Raspberry Pi into a Tablet?

The compact dimensions of the Raspberry Pi make it ideal for projects where portability is required. The credit card-sized Model B boards offer more processing than the even smaller Pi Zero boards but come with a key trade-off: profile. Model B boards have a collection of PC-scale ports that necessitate a thickness to the tablet that is unlike mainstream tablets.

SunFounder has opted for power over profile with its RasPad boards, achieving a wedge-shaped design. This accommodates the Raspberry Pi Model B board while essentially offer a built-in tablet stand.

What You Need for RasPad 3

Once you've got the RasPad 3 kit, you'll need two things for assembly:

Several versions of the Raspberry Pi 4 have been issued. Originally, 1GB, 2GB, and 4GB models were released, but as of 2020, the 1GB has been dropped, and a new 8GB model released. All are compatible with the RasPad 3.

We've tested the RasPad 3 with the 4GB model of the Raspberry Pi 4.

For your SD card, select 16GB or larger. The RasPad OS installed at 8.33GB, which makes the common 8GB cards too small to run. 16GB microSDs are barely a couple of dollars more expensive than 8GB cards these days, so this should be affordable.

What's in the Raspad 3 Kit?

A kit-based Raspberry Pi project, the RasPad 3 features a host of cables and accessories to ensure a successful DIY tablet experience.

Upon unboxing, you'll first see the RasPad device. It has a removable back to provide access for mounting the Pi and the necessary components to ensure a working tablet.

To mount the Raspberry Pi 4 successfully inside the RasPad, the following are included: standard USB, Ethernet cable, two micro HDMI cables, and a USB type-C cable. These are used to connect the matching ports on the Raspberry Pi 4 with the expansion boards mounted behind the RasPad display. These, in turn, enable the Pi's ports to be found all around the tablet, rather than limiting them to a specific portion of the case. A microSD card extension board is also included along with an FFC ribbon cable to connect it to the satellite microSD slot.

For cooling, the kit features three heatsinks for the SoC, RAM, and USB controller. There is also a case mounted fan and cable, and finally an Accel SHIM module. This sits on the first six GPIO pins, doesn't require soldering, and manages screen rotation. For securing the fan to the case the kit includes four M2.5x9 millimeter screws; for securing the Pi and the rear panel, nine M2.5x4 millimeter screws are included. There's also a screwdriver in the box.

The RasPad relies on a built-in battery that delivers around two hours' usage. A power cable and adapter are included in the kit, and the first task after assembly is to charge the RasPad. A useful battery indicator can be found next to the brightness controls.

You get a good appreciation of how things work when you get to put them together yourself. The same is unsurprisingly true of the RasPad 3. Featuring a largely straightforward assembly process, it can be put together inside 15 minutes. The full setup including installing the RasPad OS should set you back no more than half an hour.

Construction isn't without its niggles, however. You'll need a soft surface to place the tablet screen on as you fit the Raspberry Pi 4, for example. Meanwhile, cabling is largely a good fit, but in our pack the USB 3.0 cable was a tiny bit (two or three millimeters) too long. This led to issues securing the Raspberry Pi in its designated location.

The screws could do with better labeling too, as it isn't clear which pack is for which task. Overall, however, it is a painless experience. Given the most complex stage is connecting the cooling fan correctly, assembling the RasPad 3 is an uncomplicated task for almost anyone.

To make the most of the touchscreen interface and tablet form factor, SunFounder has released RasPad OS. Installing this on a suitable microSD card (16GB or higher) using a desktop computer and the BalenaEtcher app. You'll find this at www.raspad.com/pages/download.

Beware, however; this is a slow server. On an internet connection tested at 55Mbps, the download took around an hour. As such it's smart to start this off before assembling the tablet.

One up and running, RasPad OS presents you with a touch-friendly user interface (UI). This is where the setup begins, a quick process to determine your location and set up Wi-Fi. After this, a list of pre-installed applications is displayed.

RasPad OS features all the usual Raspberry Pi OS tools, such as Minecraft Pi, LibreOffice, and SonicPi. But the RasPad OS is split, which means you're going to need a keyboard and mouse for any intensive activities. Fortunately, with Bluetooth 5.0 and USB ports, it shouldn't be too difficult to connect an input device.

Two elements contribute to the RasPad: the Raspberry Pi 4, and the RasPad tablet chassis and display. As such, the finished device is based on these two elements.

With the Raspberry Pi 4 you'll get quad-core 1.5GHz 64-bit processor with a choice of 2, 4, or 8GB of RAM. That's already beating many budget Android tablets. Then you've got the Wi-Fi, Bluetooth 5.0, and access to the Raspberry Pi's ports (except DSI) and GPIO interface. There's also the SD card slot, which you'll need for booting and storage. It's a hardy little computer that is well suited to running as the heart of a tablet computer. 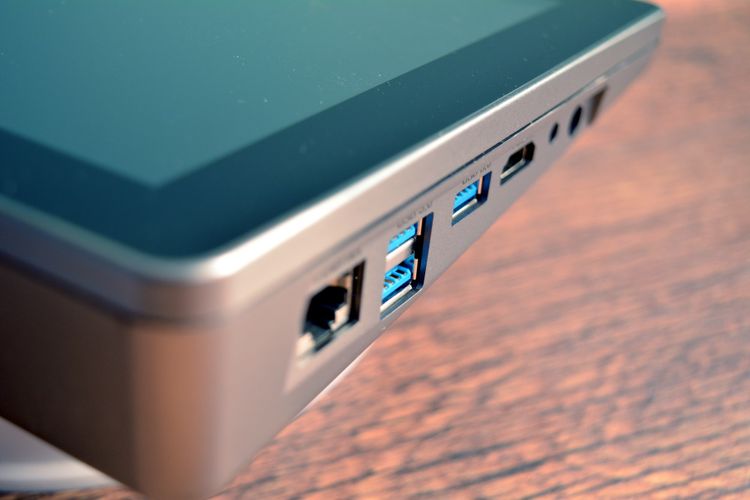 To interact with RasPad OS you have the 1280x800 10-inch IPS 10-point multi-touch touchscreen, with 16:10 aspect ratio. Video is sent to the display via one of the Pi 4's micro-HDMI ports.

The Pi 4's other ports are accessible on the RasPad thanks to the passthrough cables and expansion boards inside. On the side, you'll find a full HDMI port, three USB 3.0 ports, a single Ethernet port, slot access for GPIO and CSI, a 3.5mm headphone jack, and an SD card slot. In addition, the RasPad has a power button and volume and brightness controls.

Is the Raspberry Pi Suitable as a Tablet?

When we think of tablets, we immediately consider finger-controlled touchscreen devices with an intuitive UI. While the Raspberry Pi 4 makes a suitable candidate for powering a tablet, RasPad OS feels underdeveloped in places.

In certain scenarios, such as accessing the main RasPad OS menu, it works fine. For other tasks, however, it's less than satisfactory. In an age of advanced tablet operating systems, having a mouse pointer that you drag around with your finger feels a bit dated. Further, the secondary touch keyboard (called when using the desktop view) is less reliable than the main Android-style keyboard.

The result is a touch interface that isn't quite as seamless as you might be expecting. It's entirely usable but misses the polish of even the cheapest Android tablet UI.

The downside of all this is that the Raspberry Pi loses some of its traditional advantages. For example, while the CSI port for cameras and the GPIO pins remain accessible, they're hidden behind drab, grey plastic. Slots provide access, rather than doors, and this almost certainly robs the Pi of some of its personality and immediacy.

It's worth noting that it is vital that you eject the microSD card before opening the RasPad 3 case. Failure to do so will result in the slot breaking off from the expansion board, leaving you with a RasPad 3 that won't boot.

The RasPad Is Something Else

It's a tablet, alright, but the RasPad has a hidden dimension that isn't all that mysterious if you know much about the Raspberry Pi and its purpose.

The user interface isn't perfect (we hope to see some developments), and the GPIO pins are just too well hidden while remaining accessible. Also, the battery life could be better. Our test device seemed to run out of juice at every important moment, lasting around two hours. On the plus side, it recharges in less than an hour.

That said, the RasPad 3 brings portability and flexibility to the Raspberry Pi 4 that no other kit delivers. The fan might be noisy, but you can now literally take the computer anywhere. I popped to my parents' house with it and used it to write some of this review. I also installed some emulation tools for retro gaming.